Recipient of the Marie Milner Award 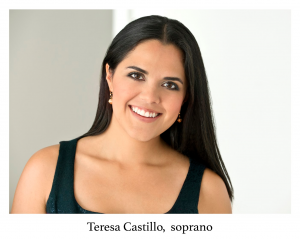 Hailed by the San Francisco Gate for her vocal “power and flori elegance”, soprano Teresa Castillo was a recent participant at San Francisco Opera’s prestigious Merola Opera Program and sang the role of #1 in Conrad Susa’s Transformations. This spring, she made her Carnegie Hall debut appearing with the New England Symphonic Ensemble performing a brand new work entitled Reflections on a Mexican Garden, which was written for her by composer Kevin Padworski. In January 2019 she will be making her debut with the Imperial Symphony Orchestra singing the role of Königin der Nacht in Die Zauberflöte. She is a recent winner of the Lois Alba Aria Competition, Anita Cerquetti International Opera Competition, semi-finalist in the prestigious Hans Gabor Belvedere competition, winner of the Elaine Malbin Competition, and career grant recipient from Career Bridges New York. Ms. Castillo appeared at Bel Canto at Caramoor for two summers as an apprentice and young artist. While there, she covered the role of Adele in Il pirata and sang the Soprano Solo in Rossini’s Petite Messe Solennelle. She will be appearing in the Inaugural Season of Teatro Nuovo singing the role of Creusa in Medea in Corinto as a Resident Principal Artist under the direction of Will Crutchfield. She also sang in the U.S. Premiere of Terra Cotta Warriors in 3D. This winter, she was an emerging artist with the Virginia Opera and covered the roles of Lucia in Lucia di Lammermoor and Tytania in A Midsummer Night’s Dream. Other recent performances include Yum-Yum in The Mikado with Loveland Opera Theatre, Barbarina in Le Nozze di Figaro with Emerald City Opera, Elsie Maynard in Yeomen of the Guard with Empire Lyric Players, The Dew Fairy in Hansel and Gretel with Lamont Opera Theatre, Drusilla in L’incoronazione di Poppea with Metropolitan State Opera Ensemble, and Adele in The Bat with Rocky Mountain Chamber Opera.  She was also a member of the Central City Opera Ensemble for seven seasons. On the concert stage, Ms. Castillo has performed Mahler’s Symphony No. 4, Brahm’s Ein deutsches Requiem and the world premiere Grammy-nominated composer Austin Wintory’s Convergence with the Boulder Symphony and Orff’s Carmina Burana with the Arapahoe Philharmonic. Along with her standard repertoire, she frequently enjoys singing new works by established and upcoming composers such as her performances as Ana Maria in the new opera En mis Palabras with the Central City Opera Ensemble. Ms. Castillo has won first place in the Classical Singer Competition at the Young Artist level, second place in the Denver Lyric Opera Guild Competition, and was featured in the “Who Inspires You?” article series in Classical Singer Magazine. She has received several grants from The Allied Arts in Denver, CO and from the Bel Canto Vocal Scholarship foundation based in Cranston, RI. During her time at Lamont, she was awarded many prestigious awards, including the Joe Docksey music career development fund, the Denver Lyric Opera Guild Award and the Recital of Distinction Award. Ms. Castillo holds a Bachelor’s Degree from the Metropolitan State University of Denver and a Master’s Degree from the Lamont School of Music. Among her many talents, Ms. Castillo spent a brief period of her life as a clown while still living in Denver and played the flute for thirteen years before switching to voice. Ms. Castillo is represented by Robert Lombardo Associates. 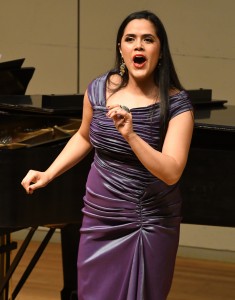