Recipient of the 2011 First Place Award 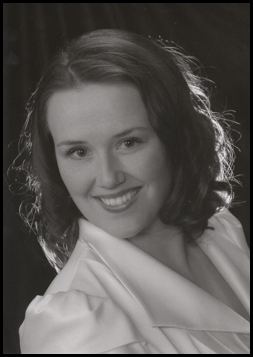 Soprano, Jennifer Youngs is an emerging artist that most recently appeared in a concert of arias with the Dallas Opera Orchestra and has appeared with composer Jake Heggie and participated in a Masterclass with him in 2010 at University of North Texas.

Jennifer participated in the Opera Overture 2000 Summer Program in Malibu, California, an intensive summer program with emphasis on technique, artistry and movement with training in German, French and Russian song.

Recent roles have included Birdie in Marc Blitzstein’s REGINA, Vitellia in La CLEMENZA di TITO.  She has also appeared as Clorinda in La CENERENTOLA and Casilda in The GONDOLIERS.

Jennifer has recently won the Kansas City district of the Metropolitan Opera Council Auditions and was nominated for a Richard Tucker Award in New York City.