Recipient of the 2008 Third Place Award 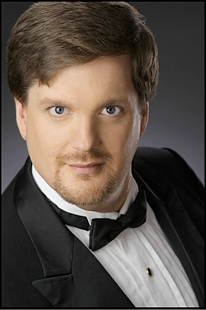 Whether it is the righteous indignation of RIGOLETTO, the cowardice of Papageno, the base depravity of Tonio or the sly wit of GIANNI SCHICCHI, baritone Brian B. Carter brings all of these qualities to the stage, coupled with warm, polished and radiant sound.

Recently, Mr. Carter made his debut with Opera North as the enigmatic Ping in Puccini’s TURANDOT for which he was lauded by OperaOnline.us, saying “Carter added immeasurably to both the merriment and solid vocal artistry that made this show such an unqualified success.”

This past year, he performed the title roles in GIANNI SCHICCHI with Opera Illinois and RIGOLETTO  with Opera in the Heights.  The Houston Chronicle said of the performance, “With his big, commanding voice, the baritone (Carter) demonstrated he possessed his character with dignity and tenderness… Carter showed a firm control of range and technique.  His musicality and sensitivity made him the reason to hear this cast.”

Sunday, May 11, 2008
Il prologo
from I PAGLIACCI by Leoncavallo
and
Dagli immortali vertici
from ATTILA by Verdi
Brian was accompanied by Scott Holshouser
Video by Raul Orlando Edwards