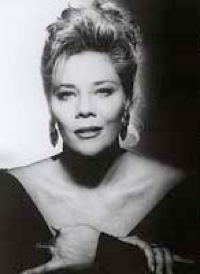 Ms. Johnson is counted amongst the great dramatic sopranos, and is considered one of opera’s premiere interpreters.  Her career highlights include the role of Emilia Marty in Janacek’s The Makropoulos Case which she sang at the Metropolitan Opera in New York, Lady Macbeth in Verdi’s Macbeth as well as Katarina Ismailova in Shostakovitch’s Lady Macbeth of Mtsensk, which she performed at the Opera Bastille of Paris.  She has also performed the Shostakovitch as well as Minnie in Puccini’s La Fanciulla del West, and Strauss’ Salome at the Teatro alla Scala in Milan.

Ms. Johnson’s career went to the next level when she appeared with Luciano Pavarotti in a televised performance as Musetta in Puccini’s La Boheme with the Opera Company of Philadelphia.  Other important highlights of Ms. Johnson’s television appearances include the nationally televised Pavarotti Plus Gala, Live from Lincoln Center and the CBS “Sunday Morning” with Charles Kuralt.

Mary Jane Johnson is currently an Artist Professor at Amarillo College, since 2000 and is a native of Pampa, Texas. She currently resides in Amarillo, Texas with her husband David and their two children Taylor and Greer. In addition, she was the staff vocal coach for the Santa Fe Opera from 2001-2005.